Some people say that Millennium of peace on the earth lies in our future after the seven years of Tribulation and great final Battle of Armageddon.

Q2. The Rapture takes place after the Tribulation?
The Bible says that there will be Rapture. Believers are interested when it would take place. Based on biblical interpretations, there are three different theories as the left diagrams show: 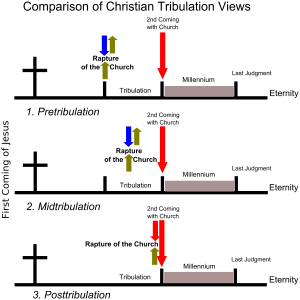 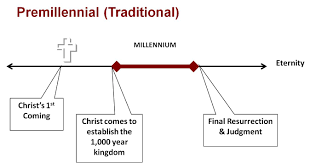 Q4. What the Fig Trees are Symbolize in the Bible?
•Mark 11:14 says, "May no one ever eat fruit [of fig tree] from you again." This is called "Cursing the fig tree."  In this passage, fig tree implies the dogmatic and money-hungry Judaism.
•Matthew 24:32 says, "Now learn this lesson from the fig tree:..." Some people interpret that this passage means the  independence of Israel in 1948. But this should be interpreted as the sign of the end time. In this passage, fig tree does not mean Israel.

Q5. What the Olive Tree means to Israel people?
•The olive tree has great significance in God’s story. They are used symbolically as peace, prosperity, beauty and the relationship between God and His people.
•Olive oil also had great symbolic value. It could indicate honor (Judg. 9:9) and joy. Pouring oil on someone's head was to wish that person happiness (Ps. 23:5, 92:11, 45:7,104:15).